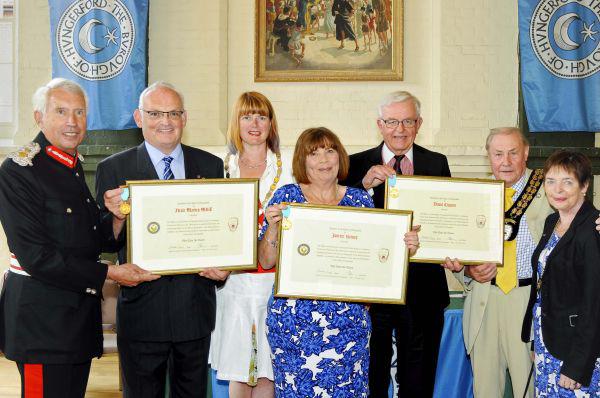 HUNGERFORD saluted its civic heroes this week in the annual Freedom of the Town awards on Tuesday 14th June 2016 at The Corn Exchange, Hungerford.

This year’s recipients, who were presented with their medal and certificate by Her Majesty’s Lord Lieutenant of the Royal County of Berkshire, James Puxley, are Janette Kersey, David Clayton and Neale Marney.

Janette has been the town mayor twice and she has worked for the CHAIN charity for many years, currently as chairwoman. In addition she has been head of the Hungerford Primary School board of governors.

David Clayton has chaired and directed the Community of Hungerford Theatre Club since 1991 and his dedication to the dramatic arts in Hungerford has enabled many young people to excel, gain self-confidence and set them on the road to a successful future”. David is the driving force behind the Young Performers, Youth Theatre and children’s theatre from which many have gone on to study dramatic art and some to earn a living in the profession.

Neale Marney has been dedicated to Hungerford and to civic duties, from his work installing defibrillators to being a “mainstay” of the annual Victorian Extravaganza. Mr Marney was chairman of Hungerford Primary School governors for many years and is a former president of the town’s Tuesday Club. He is also a chorister and churchwarden at St Lawrence Church.