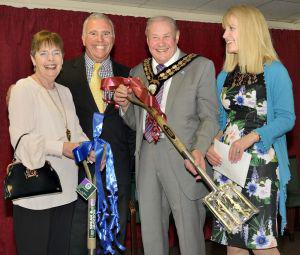 Cllr Martin Crane hosted his last Mayor's Reception at The British Legion on Friday 21st April 2017. He was joined fellow Town Councillors and colleagues he has worked with over his five year term as Mayor. Cllr Dennis Benneyworth spoke about Martin's achievements and the appreciation of all the work and commitment he has given to the Town and acknowledging that Martin's wife Virginia has been a great support. Clerk, Claire Barnes presented Martin and Virginia with a voucher for a show and meal at the Watermill Theatre and his and hers shiny new spades to use in their new found time at their allotment.