Armed Forces Day on Saturday 30th June was marked by various events, starting in the morning with the dedication of a memorial tree on the Common with an army chaplain officiating. At 12.00, 6 Armoured Close Support Battalion, REME started the main parade from the football ground before marching down the High Street. The salute was taken by the High Sheriff of Berkshire, Graham Barker, the Constable of the Town and Manor, Ellie Dickins, the President of the RBL Hungerford Branch, Jack Williams, and Deputy Mayor, Cllr Keith Knight. The parade was led by the band of the Royal Logistic Corps. Events were brought to a close with a BBQ event hosted by the army at the RBL club, during which a small wreath-laying ceremony was performed. 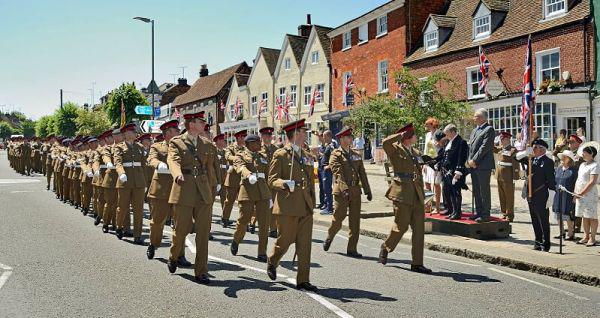